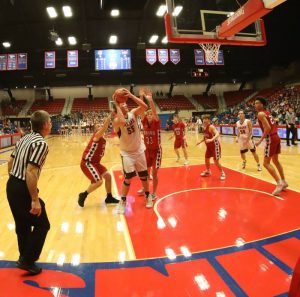 Senior Carter Doherty attacks the basket as he finished the game with 14 points in their 57-40 victory over Kingman, Mar. 7. -PC: Ron Gates

The Eagles jumped to an early 6-0 lead in the first attacking inside the paint. Girard did not score until the 3:50 mark as shots weren’t able to fall. Senior Caleb Muia picked up two fouls midway through, but the Trojans stayed within distance as they trailed 8-6 at the end of the quarter.

Much like the first, neither team was able to find production offensively in the low-scoring affair. Girard tied the game up midway through the second off their aggressive inside attack of senior Carter Doherty. Shots weren’t able to fall down like they usually do for Caleb Muia with the Eagles defense double teaming the senior.

Kingman then went on a 5-0 run leading by as many as 9. In one of their lowest scoring halves of the season, the Trojans trailed 18-13.

Girard changed up their plan defensively in the third quarter applying heavy half-court pressure. The Eagles jumped to a six-point lead early, but the Trojans weren’t ready to back down. Flipping the switch, Girard went on a 7-0 run off transition baskets from Muia. Aggressive full-court pressure turned into turnovers for the Eagles as Girard executed off Kingman’s mistakes, leading 34-32 at the end of the third.

Junior Ryder Worrell along with many other Trojans weren’t able to miss in the fourth quarter, outscoring the Eagles 23-8. The Trojans founds their stride at the right time, taking and extending their lead to double-digits. Keeping their foot on the gas, Girard went on to win by 17 points, 57-40 over Kingman (17-6).

“Thought our guys adjusted pretty well, we got some transition going that always helps us as well,” said Coach Rod Wescott. “When you can get Caleb out in transition, throw it up at the rim at let him go get it good things are going to happen. I’m really happy for our kids.”

Muia finished the game with 17 points for the Trojans leading the game in scoring. Doherty finished second in scoring ending his night with 14 points and a majority coming inside the paint. Other efforts include; Worrell (13), Evan Troike (9), Dillon Collins (4).

The Trojans outscored the Eagles 44-22 in the second half as they are now guaranteed a game Friday and Saturday.