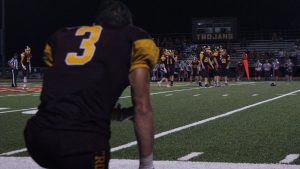 Senior Durbie McReynolds takes a break as he watches on the Trojan defense battle against the Baxter Springs Lions Friday, Sept. 6 where Girard ended up winning 32-7.

Losing nearly all their starters from 2018, there were some fresh faces on the field for Trojans.

Things didn’t start out so well for either team in the first quarter as both teams came out slow offensively. Baxter would strike first on the board with a 40-yard run from quarterback Kyler Reece. Reece proved to be troublesome for the Trojans early on with height and athleticism.

Junior quarterback Caden Lallemand started off the second half with a fake handoff up the left side for 30 yards to tie the game back up. A fumble on the following possession from the Lions gave the Trojans excellent field position as well as needed momentum. Lallemand took advantage of the positioning striking on a pass to junior receiver Mason Huebner.

Heading into halftime, the Trojans had the advantage 14-7.

Senior Durbie McReynolds started the third quarter off with a bang intercepting a Lions’ pass attempt. Much like the start of the first quarter, both teams came out of the gate slow offensively with Baxter holding the ball for the majority of the third quarter. Near the end of the third, McReynolds struck again on a punt return taking it all the way to the 18-yard line.

Lallemand would take advantage of great field positioning yet again taking it up the middle for a 2-yard touchdown bringing the score to 20-7.

Girard exploded offensively in the fourth scoring two more times on a 3-yard run from McReynolds and a 2-yard run from backup sophomore quarterback Ethan Merrell.

The Trojans defense remained strong throughout the second half holding Baxter scoreless as Girard went on to win 32-7 capturing their first victory of the season.

“We battled through some things, some adversities, overcame some situations that aren’t ideal on offense and defense,” said head coach Neal Philpot. “I was proud of our team for the way they kept fighting, kept playing and kept doing some of the things we’ve been talking about.”

The Trojans look to capture another victory in their home matchup Friday, September 13 against the always tough Galena Bulldogs.