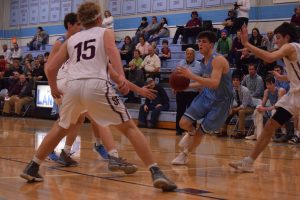 Southeast senior Tanner Craddock drives in on St. Paul junior Easton Dent in 1st round action of the Lancer Classic where the Lancers would prevail 43-41 over the Indians. -PC: Cherie Witt

In first round action of the 2019 Southeast Boys Lancer Classic, two familiar foes squared off against each other for a spot in the tournament semifinals. Southeast (4-5) went up against St. Paul (5-3), Jan. 15, as Southeast looked for revenge after the Indians were victorious 44-41 in their previous matchup.

It was a very closely contested game throughout the first half as neither team was able to take advantage. Southeast would take a 21-19 lead at the half off 6 points from junior Hayden Wilson.

Down 7 with two minutes left, senior Kenny Haney sunk a three making it a 4-point game. With five seconds left, the Lancers missed a free throw as they led by two points, giving St. Paul the ball and an opportunity. The potential game-winning 3-point shot from Adam Albertini then rolled around the rim and popped out handing the Indians their fourth loss.

For St. Paul, there were multiple players within double-digits; Kaleb Lemmons (11), Kenny Haney (11).

Southeast would have several players as well in double-digits; Hayden Wilson (10), Jace Coltrane (13).

Southeast will face the Parsons Vikings (9-5) in Thursday’s semifinals at 8:30, while the Indians face the Erie Red Devils (5-4) in the consolation bracket on the same day at 5:30.