The Lady Trojan golf team traveled to Coffeyville on Tuesday, October 14, for regional play. Labette County finished first as a team by 32 strokes, Anderson County finished second, and Frontenac finished third, so all members of those three teams that competed at regionals will play at state. The individual champion was Coffeyville’s Anna Pool who finished at 81 strokes. 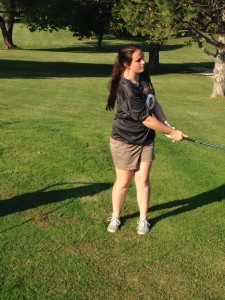 Senior Morgan Sevart was Girard’s lone state qualifier. Sevart was consistent, shooting a 58 through the front nine holes and 60 in the back nine for a 118-stroke day.
Last year, the Lady Trojans qualified for state as a team and played at Crestwood; Sevart finished towards the back of the pack with a 144, but looks prepared to play a more improved round at state. This season at Crestwood, Sevart shot a 119, 25 strokes better than her score at state a year ago. Besides Sevart, Hannah Pyle, Mary Smith, and Lauren Battitori also competed at the regional tournament.
The state tournament is this Monday October 20.