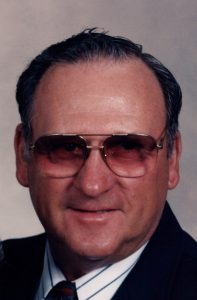 He was born July 12, 1934 in Crawford County, Kansas, a son of Theodore and Gladys Fern (Geier) Boore.

Wayne grew up in the Girard and Farlington areas and graduated from Girard High School.

On December 18, 1954, Wayne was united in marriage to Joan Garrett at the Mt. Olive Missionary Baptist Church at rural Girard.  She survives of the home.

Wayne was a lifelong farmer and stockman at rural Farington and he enjoyed spending time with his family; hunting, fishing, and wood working; sharing his sense of humor and pulling pranks on others.

Wayne was a member of the Mount Olive Missionary Baptist Church of rural Girard, where he was ordained as a deacon.

Wayne was preceded in death by a brother, Edward Boore.

Private graveside services will be held at the Girard Cemetery with Brother Tom Lewis officiating.

A Celebration of Life service will be at 11 a.m., Saturday, March 30 at Mt. Olive Missionary Baptist Church followed by a luncheon.

Friends may call after 2 p.m., Thursday at the Smith-Carson-Wall Funeral Home in Girard.