Ella Bockelman went to sleep for one last time Sunday morning, January 19, 2020, surrounded by family. She was ninety-nine years old. She went to join her husband, Laverne, who died several years ago, also at age ninety-nine.

In her own way Ella let the family know that it was time to pass. Her hands that had worked so hard all of her life providing food and clothing and love for her family lost their warmth and their color, taking on a hue reminiscent of an earlier time. 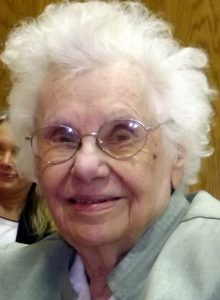 On warm, late summer evenings, both parents and children would head to those secret places that Laverne had found while fishing the strip pits of Pittsburg, Kansas. There we picked ripe blackberries, the juice staining our fingers blue. Laverne picked buckets-full, selecting the biggest, plumpest berries before moving to the next patch. We kids had our token pails. Ella picked her share of berries and had the additional task of pointing out all those that Laverne had missed.

For those of us with cell phones in our pockets or smart phones held usually in our hands, it is difficult to imagine the isolation of rural southeast Kansas within the lifetime of our elderly residents. Communication was face to face. Arrangements to visit friends or relatives some miles away were made by card or letter. Learning to drive, for Ella, meant that she was able to take the reins of the horse drawn buggy into her own hands. It was then her responsibility to take herself and her younger sisters along the three miles of dirt road to the Lutheran parochial school near Hepler. Behind the one-room school house were the stables.

Ella graduated from eighth grade and was confirmed in the Lutheran church. That was all the education a girl needed, according to her father and others at the time. Parents could choose whether their children were to be confirmed in German or English. Ella memorized her Catechism and Bible verses in German.

On June 1, 1941, Ella Grannemann married Laverne Bockelman, a Lutheran from a nearby church in Brazilton. The next day they drove (by then in a car) to Wichita, where Laverne started a job building airplanes for the upcoming war. His subsequent service in the Navy brought Ella back closer to family. After the war they settled in Brazilton and eventually in Pittsburg when they started building airplanes there.

Ella was foremost a mother, a homemaker, and a house wife.

Even in Pittsburg a garden was a primary source of food for her family. Leaf lettuce was the first fresh food in the spring followed soon by radishes. Warmer weather brought carrots, peas, green beans, corn on the cob, and home-grown tomatoes. Our mother served her family fresh food.

But garden season was also canning season. Families eat all winter long. Throughout the summer the number of colorful glass jars in the basement grew. Finally, when onions and potatoes were ready to dig, it was time to put up vegetable soup. Oh, that vegetable soup!

Foods that were not grown locally did not escape Ella’s glass jars. Foodtown on Broadway sold peaches at a sharp discount if they were bought by the bushel.

In the winter Ella made noodles by spreading dough out thin on the kitchen counter using a rolling pin. In the early days, the chicken for her chicken noodle soup never saw the inside of Foodtown. Hens were expected to lay eggs. A layer that didn’t lay was liable to lend its flavor to the dish. There are still some folks who know that feathers are more easily plucked after the whole headless fowl is dunked into boiling water. Smells are famous for bringing back vivid memories of childhood.

Ella never learned to use the spinning wheel of her grandmother. The already-woven fabric sold by the yard at the Kress Store at Seventh and Broadway was well worth the price. She had learned to sew on her mother’s treadle machine. After the war Ella bought a sewing machine with a built-in electric motor. She knew it was the wave of the future.

Ella made school clothes for the two older children who were sent down the road to the one-room school house in Brazilton. The dresses and shirts were freshly laundered and ironed. Years later when four children were sent to the Pittsburg schools, they still wore home-made clothes—with a mixture of pride and trepidation.

Ella valued education. She felt unfairly deprived of it because she was a woman. That made her want it all the more for her children. An early purchase in Pittsburg was an expensive set of encyclopedias. Later in life after the kids were mostly raised, Ella signed up for a program where she was allowed to take the GED test. She went back many days, taking a small part of the exam each time. She passed the test and earned her high school Graduate Equivalency Degree.

She understood that travel was an important part of a well-rounded education. We traveled as a family when we could, but our distance and direction was limited by the location of relatives where we could stay. Then one year we bought a canvas umbrella tent and a Coleman stove. We loaded up the big old trunk of a big old American-made automobile and filled it with boxes of newspaper-padded canned goods. After each meal we carefully washed each glass jar and returned it to its padded box. We made it to Yellowstone National Park.

In recent years memories have been stolen from Ella — first recent memories, then more distant ones. Still, she sometimes had surprisingly good days. Recently, on one of those days, a friend asked what was her most favorite thing in the world to do. “Sleep,” she answered. It was an honest response. But the friend pressed on, asking about when she was a young girl. “Climbing trees,” she said. In all these years we had never heard that. It gives us a new image.

The family feels amazingly lucky and blessed to have had the enduring presence of Ella and Laverne Bockelman, as parents, grandparents, and great-grandparents.

Services will be Wednesday, January 22, at 11:30 a.m. preceded by 10:30 visitation at Immanuel Lutheran Church rural Hepler KS, followed by internment. A church luncheon will follow and offer the opportunity to visit with family and friends. Memorial donations may be made to Immanuel Lutheran Church at the church, 673 W 680th Ave, Hepler KS 66746, or at Smith-Carson-Wall Funeral Home, Girard KS, where flowers will be received.