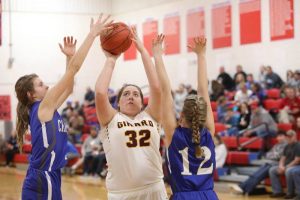 Senior Kalyn Flaharty rises in the paint as her 19 points Thursday night wasn’t quite enough as the Lady Trojans fell 65-62 to the Cherryvale Chargers. -PC: Ron Gates

After easily defeating Riverton (0-21) in the quarterfinals 64-25, the Lady Trojans (14-6) advanced to the semifinal, Feb. 28, where they faced the Cherryvale Chargers (13-8). Senior Kynzie Smith was out for Thursday’s game after suffering an ankle injury.

It was a back and forth contest as neither team was ready just yet for their season to end. Masterful passing and automatic mid-range shooting kept Girard with a small advantage early in the first. The Chargers made their way back into the game as they found their groove at the right time.

Heading into the second, the score would be tied, 11-11, as it looked to be a closely contested matchup.

Cherryvale took the lead for the first time early in the second quarter, but senior Kalyn Flaharty provided a spark inside putting the Lady Trojans ahead. Both teams would slow down, going cold offensively midway through the second quarter.

Seven players for Girard posted a score as Girard’s deep team, even with injuries, maintained a 23-22 lead at halftime.

In the third quarter, both teams continued to exchange baskets back and forth. Momentum would start to swing Cherryvale’s way with the sluggish play from the Trojans as the Chargers grabbed their largest lead of the game (5).

With energy swinging in the Chargers favor, Girard made a strong effort getting back into the game being down as much as 7. After a three before the buzzer from senior Jordanne Ferguson, the Lady Trojans cut Cherryvale’s lead to four heading into the fourth.

Cherryvale maintained a four to six-point lead throughout the fourth quarter as Girard looked to find an answer offensively. Not ready to go home yet, the Lady Trojans found their way back into the game cutting the lead down to two with under a minute remaining.

“I can’t say enough about these seniors, they were playing well down the stretch, so we just rode with them pretty much that whole fourth quarter,” said Coach Brad Herlocker. “Very proud of the girls, particularly the seniors.”

Senior Kalyn Flaharty provided a major chunk of the offense scoring 19 points for the Trojans, including 12 in the second half. Ferguson made a strong effort as well finishing with 11 points for the Lady Trojans. Other key efforts include; Valley (8), Worrell (6), Bailey (6), Sands (5).