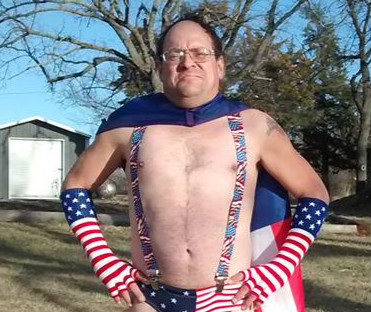 Captain Trashman Kenny Schettler, winner of the Polar Plunge’s Most Money Raised Individually and Best Costume. Schettler raised over $4,000 for Special Olympics. Schettler, who has participated in the Polar Plunge in years past, won Most Money Raised Individually for his contribution and also won Best Costume for his American flag-themed “Captain Trashman” outfit.

Regarding how he first became interested in the cause, he said, “I first became involved with mentally disabled individuals during high school. I worked at the living skills center in St. Paul and would help take them to Special Olympics events. It’s a good way to continue to raise money for our local Special Olympics.”

In Pittsburg’s 2012 Polar Plunge, he also won Most Money Raised Individually for his $1,220 contribution and Best Costume for his combination outfit of purple Mohawk and pink speedo.