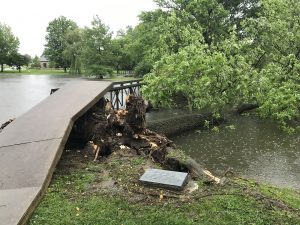 An uprooted tree by University Lake damaged a large portion of the sidewalk leading to the bridge, making the bridge inaccessible.  COURTESY PHOTO

The campus as a whole was relatively unscathed during the severe storms and high winds that came through Pittsburg late Monday afternoon just as a tornado touched down south of town, but the roof of Grubbs Hall did sustain damage and the building is taking on stormwater as rains continue. 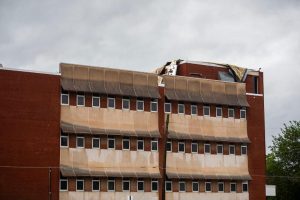 No injuries were reported.

By early Tuesday morning, custodial crew members and faculty in those departments were working to remove supplies, furniture, and electronics from faculty offices and classrooms, and to mop floors, in order to minimize impact.

Trashcans have been placed throughout the building to collect drips, particularly on the fourth floor.

Administrators are assessing damage and department chairs are attempting to reach faculty, who are on summer break, to give them an opportunity to make decisions as to where their belongings are moved and to oversee the process, if desired. 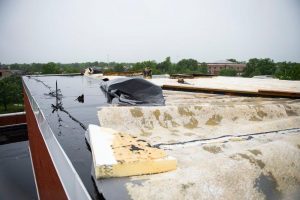 He also reported a few trees being uprooted on the east side of campus. At the University Lake, one such tree uprooted a portion of the sidewalk leading to the bridge, making the bridge inaccessible.

KRPS 89.9 FM Director Tim Metcalf reported a satellite dish was blown off of the roof of Shirk Hall.

Elsewhere in Pittsburg, damage reported includes damage to outbuildings and secondary structures, shingles blown off of houses, wind damage, large trees down, and downed power lines, according to City of Pittsburg Public Information Officer Sarah Runyon. The Langdon Lane area and rural areas southeast of Via Christi Hospital were the hardest hit. 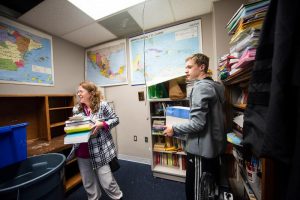 Mindi Moss, assisted by her son, helps to remove items from her husband Grant Moss’ office in Grubbs Hall on Monday amidst water damage from a leaking roof. COURTESY PHOTO

Flooding on roadways and some neighborhoods continues. Up to one inch of rain is expected Tuesday, with a 50 percent chance of rain later in the week, according to the National Weather Service.