After missing the playoffs last year, the Girard Trojans are back in after a 29-14 win over Iola on Thursday night. Girard started the season 1-5, but they won when it really counted, defeating Anderson County, Burlington, and Iola by a combined score of 123-17 to win the 4A-II District 3. The Trojans forced four turnovers in the game with three fumble recoveries and an interception. The Trojans were in control from the beginning, scoring their first touchdown 50 seconds into the game after a 38-yard run from Kord Curran on their second play from scrimmage. Curran would finish with 78 yards rushing and two TD’s. After the touchdown, the opponents traded punts before Girard forced their first turnover of the game. 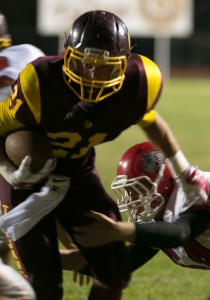 Dylan Page and the Girard Trojans are District Champs after beating Iola 29-14 on Thursday night.
PHOTO BY RON GATES

The Trojans were stopped on fourth down on their ensuing drive, but Tyler Green quickly gave the ball back to Girard after forcing and recovering a fumble. Girard would capitalize on a six-yard touchdown by Curran to take a 13-0 lead early in the second quarter. After forcing a punt, the Trojans finished their next drive with a 38-yard pass from Eric Wilson to Green that found the endzone, and Girard would take a 20-0 lead into halftime.

On the first drive of the second half, Iola drove into Trojan territory before being intercepted by Juan Ortiz, and two possessions later Girard would score on a 15-yard run by Dylan Page to go up 26-0. Iola would answer back by going 80 yards in 11 plays to cut the lead to 26-6 with 7:55 left in the ballgame. The Trojans answered with an Ortiz field goal. Girard subbed in their second-team defense, and Iola would capitalize by scoring their second fourth-quarter touchdown with 45 seconds left in the game. Too little too late, Girard would take the contest 29-14. Iola outgained Girard 327 to 258 in the game, but 80 of those yards came with Girard’s substitutes in on the last drive.