In the April 10, 2015 issue of Hometown Girard we did a story regarding how “City staff helps realize wish of deceased father”. Below is the original letter relating to that story, written to The Girard Press from Don D. Hoggatt in 1996. In his letter he asks for help locating the burial site of his grandfather Francis Marion Hoggatt, and also reminisced about his time in Girard.

Hoggat passed away in 2009, never knowing the location of the grave sites or realizing the dream of placing markers on his family’s graves. See the current April 10, 2015 issue for the full story.

Dr. WT Swart delivered me on the 22nd August 1918 in the City of Girard. The house is no longer there. We moved to Tulsa when I was 10, however for the next 5 years I would spend my summer vacation with my grandparents on a farm three miles west of the cemetery.

My grandfather Hoggatt (Francis Marion) was buried in that cemetery on 4 January 1928, section seven, but there is no marker. I would like help in locating this grave so that I might have a marker placed on his grave. So far no one has been able to tell me exactly where he is buried. HELP! I have many relatives buried in Girard and the surrounding area. 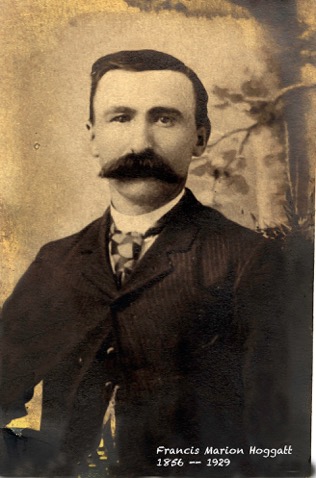 A short time ago while doing some genealogy research, I spent all day on a Sunday driving and walking in and around Girard. Much has happened to my hometown during the past 68 years. You cannot ride the street car to Pittsburg; Condor Ford is not on the north side of the square; the hitch racks and watering places are not around the court house anymore. Whittier school was a nice building, I went to 1st through 4th grade there. However it could have used inside restrooms. Mrs. Williams was the teacher of grades 1 and 2, the house she lived in still stands east of where the school was. Emerson school also was not modern. I went to 5th grade there – that school was gone. The old high school sure looks different.

What happened to the hospital and ice house that was just west of the square? Do they still rope off the square and have fun on Halloween? After Crocker’s barn south of town burned, did they rebuild it? I could not find the Kirkpatrick Funeral Home and Furniture Store. It was on the southwest corner of the square. We used to buy our groceries at Barricks. I could not find the Ross Blacksmith shop across from the jail. The Sundry’s Green House was not there. The Glick Smith house was still there. The livery stable my grandfather ran was gone, as well as the Appeal to Reason and all of the Little Blue Books. I must be getting old because this is only a small part of the changes I found.

One nice thing is that the old water plant does not smell as bad as it used to, but Cherokee St. sure was a mess. Sauers used to be place to buy clothing, but in fact there was nothing open. That is not new because nothing opened on Sunday when I lived there. The First Christian Church is the same building where I went to Sunday School and sat next to George Beasley. The gum machine in front of the music store on the west side is gone. The bank with the big safe in the window has disappeared. I could not find Rozells Creamery either. The Standard Oil Company sign for the gas station that was on the southeast corner of the square is still there. That is where we put gas in the T-model ford as we left Girard for Tulsa. Olie Lam’s office was on the west side; he was my grandfathers brother-in-law. I could not find a trace of the hardware store that was on the east side. Walberts and Timberline was on the southwest corner and the hot dog stand was on that corner on Halloween. Kids under 6 could chase greased little pigs on Halloween in that same area.

I am writing my memoirs for my children and so far I have not found anyone in Girard that was there when I was. I would love to hear from someone who lived there in the early 1920s.

Are there city maps of Girard as it is today and as it was in 1920? It was interesting to visit and bring back memories. I will be back when the city is open.

Three quarters of a century has changed things everywhere.