Girard traveled to Riverton Friday night to kick off the 2015 football season, and the Trojans went home victorious.  While the Trojans likely didn’t earn any “style” points, they played a well-rounded game with clock-draining offensive drives and an interception, two fumble recoveries, and three second-half fourth down stops on defense. 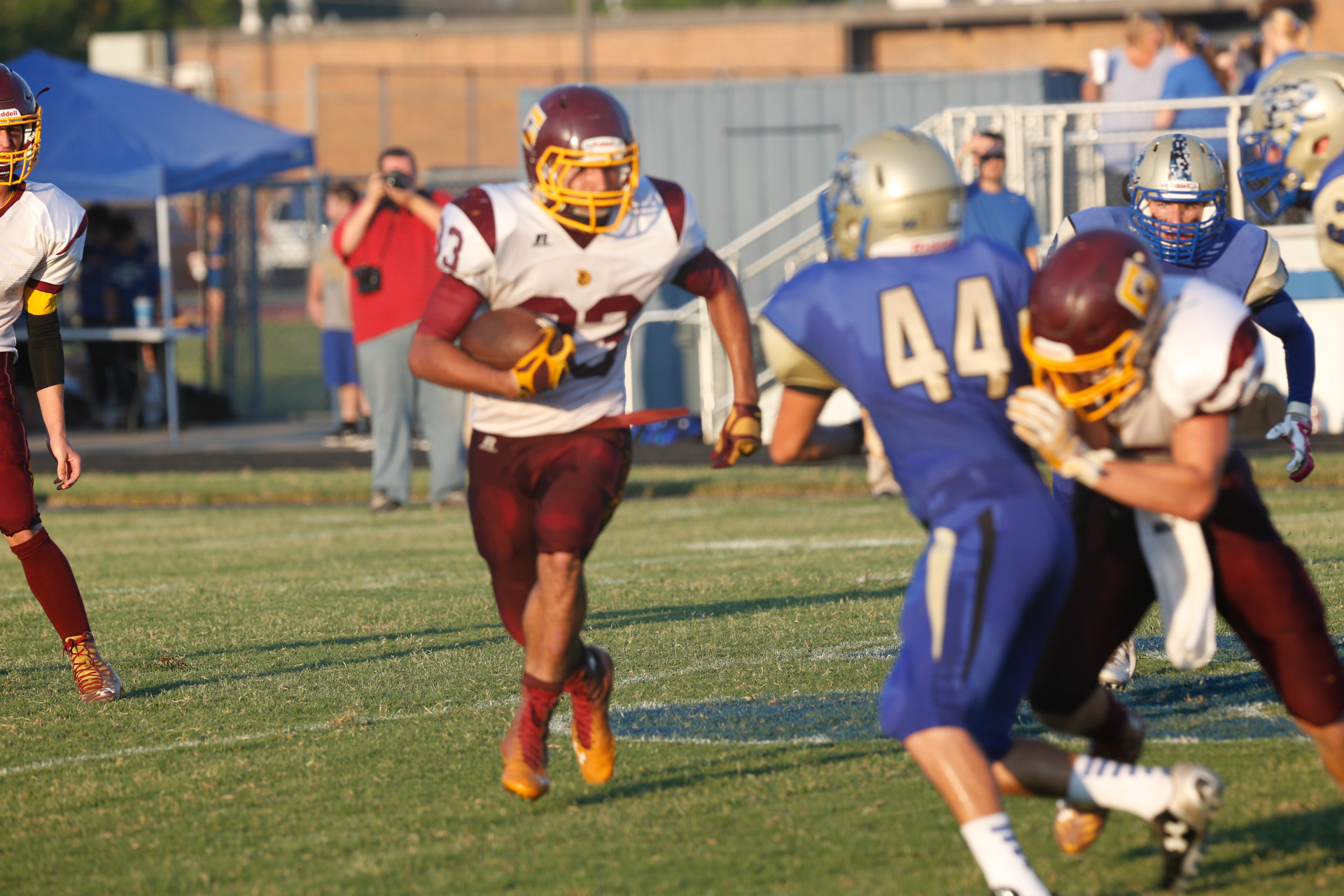 Girard returned the opening kickoff of the season, and their first drive couldn’t have gone much better.  A 13-play 52-yard drive milked over 7:30 off the clock, and it was capped off by a three-yard run from Trey Eaton.  Riverton’s first drive of the season was quite the opposite as the Trojans recovered a fumble on the first play of the drive.  Girard drove inside Riverton’s 10-yard line, but gave the ball back to the Rams with a fumble of their own.

Both teams would trade punts before Girard would start their next scoring drive with 4:05 left in the first half.  Starting at their own 37-yardline, the Trojans used a 31-yard rush from Eaton followed by a 17-yard carry from Eric Wilson to travel deep into Ram territory.  Four plays later, Eaton scampered in from four yards out to give the Trojans a 14-0 lead.  With the half coming to the close and the Rams looking to put points on the board, the Trojans pressured the quarterback and forced an errant pass that would be intercepted.  Girard went into the intermission up 14-0.

Riverton’s first drive of the second half ended the same as their first drive of the game.  On the first play, Girard forced and recovered a fumble.   After a three-and-out, the Trojans were forced to punt, but the Rams would be forced to start at their own 16.  Quickly facing fourth down, the Rams tried picking up three yards, but they were stuffed by the Trojans.  Girard took over at Riverton’s 24-yardline.

A roughing the passer call on a long third down put Girard inside the Rams’ 15, and a third-and-seven pass from Wilson to Eaton ended in a touchdown as Eaton went end over end over a defender and landed in the endzone.  The Trojans took a 20-0 lead with 6:19 left in the third quarter.  Riverton answered with their best drive of the game, going 57 yards in less than two minutes to put six points on the board.

After a Trojan punt, Riverton began driving again, but it was stopped short when the Rams were stuffed again by a strong Trojan front on fourth down.  The Trojans would punt again, and this time the Rams made it to the Trojan 17-yardline.  For the third and final time, the Trojans defense came up huge on fourth down, stopping a Riverton run up the middle.  Girard took over with 7:48 left in the game, and Riverton would not get another chance to score as the Trojans methodically ran out the clock with 12 running plays.

Girard totaled an unofficial 206 rushing yards on 51 carries, led by Eaton’s 101 yards on 26 carries.  Wilson rushed for 52 yards and added 49 yards through the air on four completions.  Riverton totaled 216 yards on the ground, but were just 2-11 through the air for 19 yards.

Girard will host the 1-0 Galena Bulldogs next Friday.  The Bulldogs are coming off a 7-0 shutout of Colgan in their first game of the season.