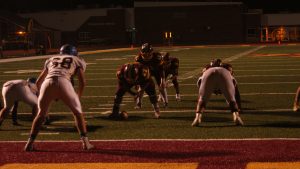 Sophomore quarterback Caden Lallemand (#11) gathers under senior center Kaleb Franklin (#67) during a Trojans drive in their matchup with the Iola Mustangs, Oct. 18.

In the Trojans’ previous matchup, Oct. 11, Girard suffered a crushing 41-27 defeat to the Prairie View Buffaloes. Following the loss, the Trojans traveled back to Frank Jameson for their final home game of the season against the Iola Mustangs. Iola came into the matchup off a 20-6 defeat to Burlington, Oct. 11.

With several players of banged up from injuries, the Trojans were without senior Matthew Pike who’s out due to a leg injury.

Their matchup with the Mustangs marked a must-win for the Trojans. Their loss to the Buffaloes put the Trojans out of contention for a home playoff game in districts. Sitting in the middle of the standings, every win becomes key to stay in the playoffs.

The Trojans struck first early in the first quarter as senior Durbie McReynolds punched in a 3-yard touchdown to put the Trojans ahead. Freshman kicker split the uprights putting Girard on top 7-0.

Iola responded quickly following the drive on a 22-yard run down the sideline. The field goal attempt was blocked by the Trojans as Girard remaining ahead, 7-6.

Following the Iola drive, the Trojans attempted a reverse kickoff run which led to a fumble then Iola then picking it up and running it back for a touchdown. Unable to convert on the two-point conversion, Iola led 12-7.

With the first quarter coming to a close, the Trojans would drive the ball down the field. The drive then led to junior quarterback Caden Lallemand throwing a 50-yard dime downfield to McReynolds as the Trojans took back the lead. Davidson sunk the field goal once again with the Girard leading 14-12 at the end of the first quarter.

From there, the offense of both sides struggled to gain ground as neither team scored for the entirety of the game. Marking one of their best defensive showings this season, the Trojans went on to win 14-12 over Iola.

“We overcame some adversity. We moved the ball at times, we just fumbled inside and we turned the ball over, can’t be doing that,” said Head Coach Neal Philpot. “Our defense played a ‘bend but don’t break’ mentality tonight. Kept fighting and kept swinging and we got the stops we needed to get the win.”

The Trojans travel to Osawatomie for their final regular-season game against the Osawatomie Trojans (1-6).

Following a 62-16 mercy-rule victory over Marmaton Valley, the undefeated Indians played their final home game of the year against the winless Chetopa Hornets. Much like their previous victory, the Indians were able to control from the beginning whistle with the Hornets struggling to compete with the red-hot Indians.

Injuries forced Chetopa’s head coach to forfeit the game with six minutes remaining in the second quarter as the Indians went on to win 71-0, dominating Chetopa and adding to their winless season.

St. Paul (7-0) travels to Leroy for their final regular-season game of the year, Oct. 25, against Southern Coffey County (2-5).