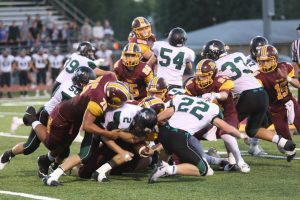 MORAN, Ks – The St. Paul Indians (6-0) traveled to Moran to face the Marmaton Valley Wildcats (1-5) where the Indians easily defeated their opponent 62-16 after a mercy rule was implemented at halftime.

St. Paul dominated from the beginning whistle with the help of their tandem rushing attack of seniors Adam Albertini and Easton Dent.

The Wildcats held the Indians to only 20 points in the first quarter but St. Paul’s offense went on a tear throughout the second quarter scoring 42 points to finish off the game.

Remaining undefeated on the season, the Indians stay home for senior night Oct. 18 against Chetopa (0-6).

LACYGNE, Ks – Coming off a tough 35-28 district loss to Anderson County Oct. 4, the Trojans looked to avenge themselves against undefeated district opponent Prairie View, Oct. 11. The Buffaloes were able to dominate from the first to the final quarter credited to their powerful rushing attack beating the Trojans 41-27.

Shutout in the first quarter 20-0, Girard’s offense accumulated only 60 yards of total offense as the Buffaloes defense kept the Trojans to a minimum.

Girard improved their game overall in the second half as their passing game and running game pushed the ball upfield. The Trojans made a strong effort to get back into the game getting it to within 14 points. But their efforts came too late as Prairie View ran down the clock securing their win and their undefeated record of 6-0 while the Trojans drop to 2-4.

The Trojans stay home for their final home game of the season, Oct. 18, in a must-win district game against the Iola Mustangs (1-5).