With both Trojan teams owning 1-0 records on Tuesday, they traveled to Pittsburg to face the Purple Dragons. While the Lady Trojans could not get over the hump to complete a comeback, the boys were able to come back from multiple deficits to earn a win against the 5A opponent. In the girls game, both teams came out of the gates struggling in the first quarter, but it was Girard who would head into the second with a 9-7 lead. It would be the last time Girard held a lead at the end of a quarter. 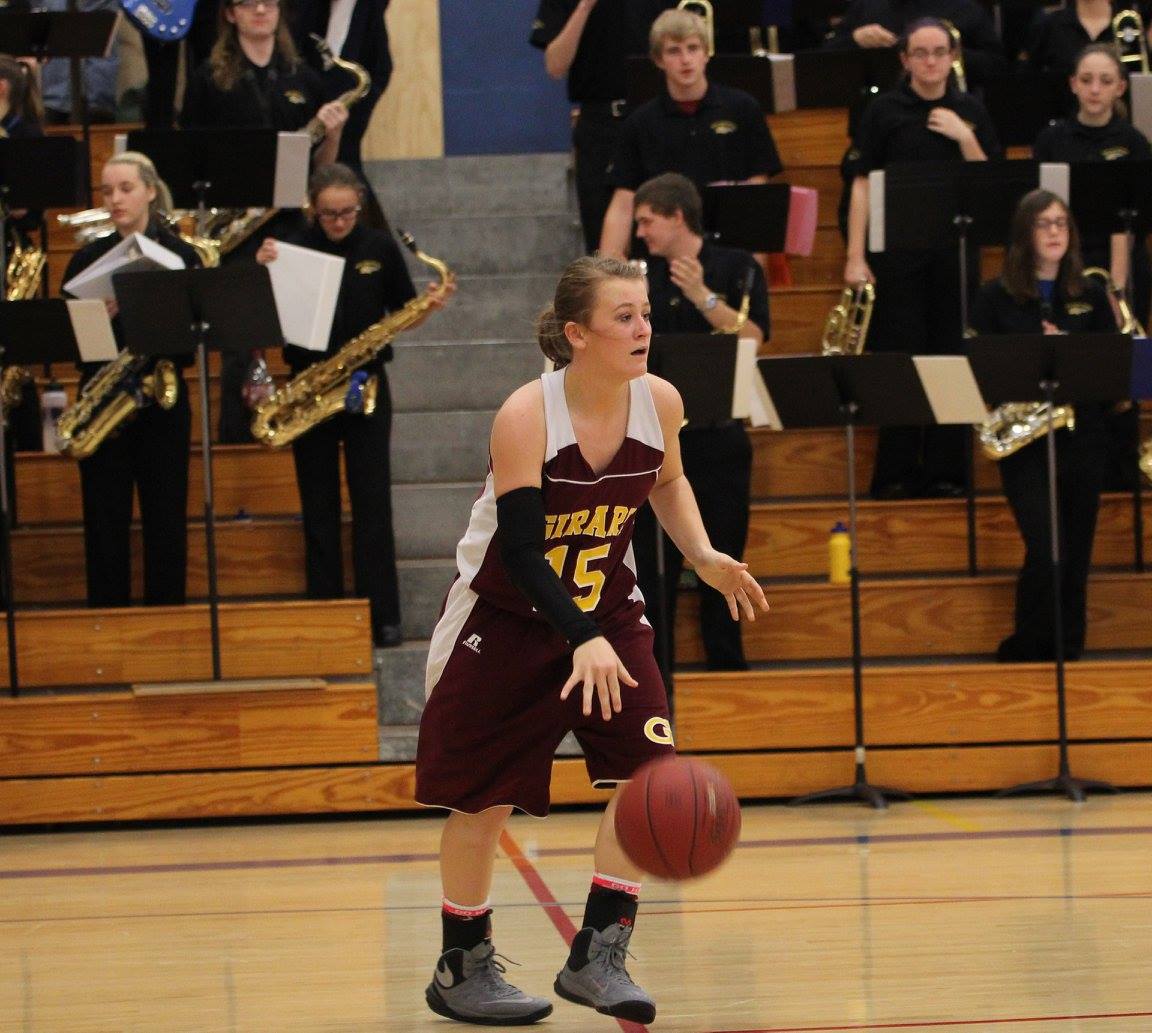 Jacey Murphy and the Lady Trojans late rally came up short vs. Pittsburg on Tuesday night. PHOTO BY JOYCE KOVACIC

Pittsburg found their rhythm offensively in the second quarter, scoring 17 points and hitting four three-point buckets, while holding Girard to just eight points. The Lady Trojans’ only second-quarter points came from the free throw line, as Sydnee Crain hit 5-6 from the line, Lauren Franklin made 2-4, and Ashley Ray sunk 1-2. Girard trailed 24-17 at halftime.

With seven points from Olivia Hanson, the Lady Trojans found life in the third quarter. Hanson hit 5-6 free throws and added a two-point basket to lead Girard’s 15-point quarter. The Girard defense also found improvement in the third, as they held the Lady Purple Dragons to just 10 points, and the Pittsburg lead was cut to 34-32 heading into the fourth.

The fourth quarter was back-and-forth, and Calea Augustin did all she good with eight points in the quarter, but Pittsburg would outscore Girard 19-14 to take the 53-46 victory. Augustin and Crain led the team with 10 points apiece, each with a three-pointer, and Hanson just missed double digits with nine points.

The boys’ game was action-packed until the end, and it was the Trojans who escaped with a four-point victory. The first quarter was a solid indication of how the rest of the game would play out. Girard quickly held a 7-2 advantage before a 6-0 Pittsburg run gave them the lead. After five lead changes, the Purple Dragons hit their third trey of the quarter to take a 22-16 lead, but Laike Damman’s second three-point bucket brought the Trojans within three points entering the second. 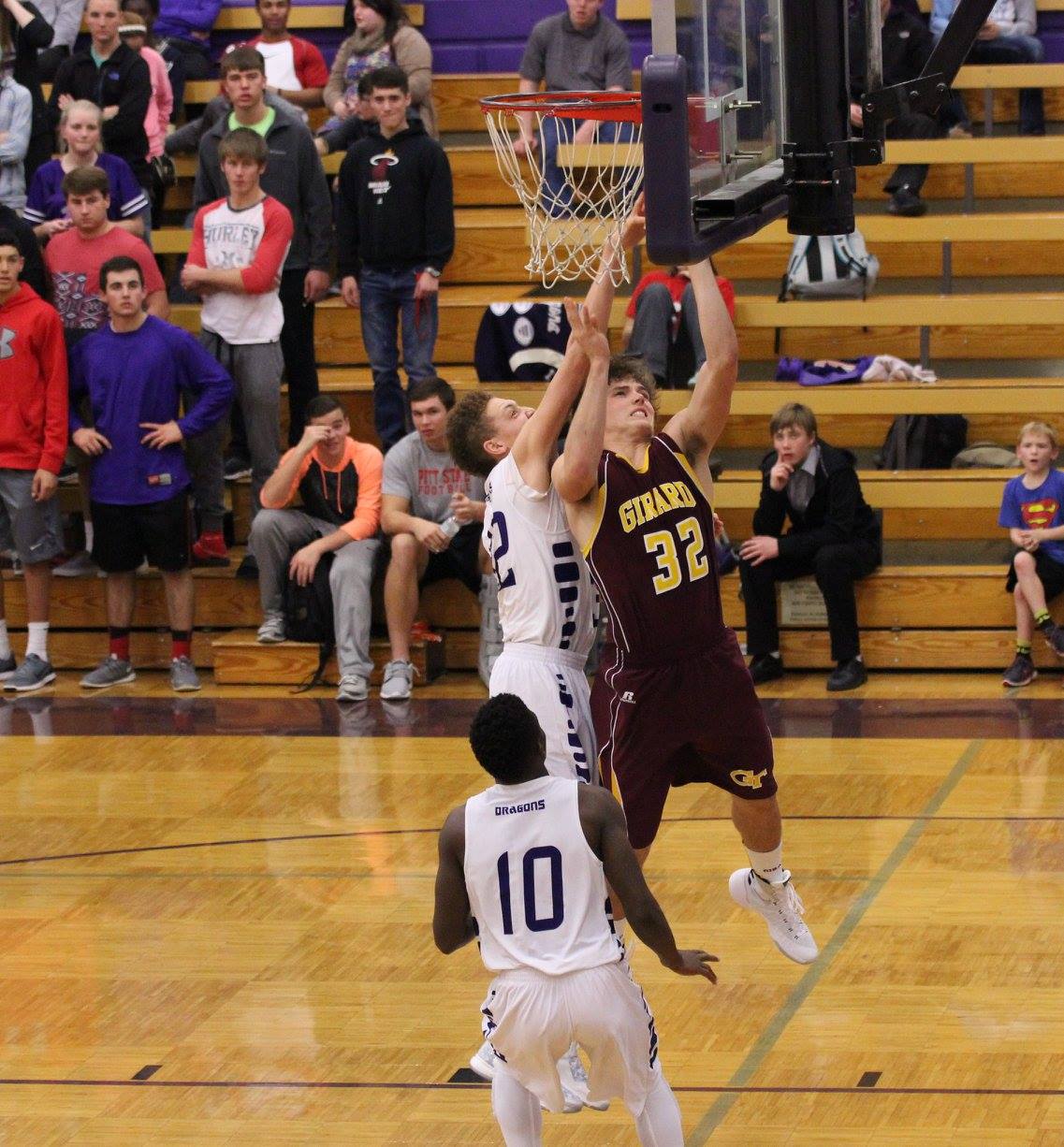 Kross Hamblin had 17 points, second to only Drew Davied in the Trojans come from behind win over Pittsburg on Tuesday. PHOTO BY JOYCE KOVACIC

Both teams struggled to find their rhythm on offense to start the second quarter, but an 8-0 Purple Dragon run gave them a nine-point lead before Girard would make a push. The Trojans would end the quarter on a 10-2 run, fueled by two more long balls and eight points from Damman.

At halftime, Pittsburg led 32-31, due to several fast-break layups and a 9-9 showing from the free throw line. Girard shot just 5-10 from the charity stripe in the half.

Two buckets from Tyler Green to start the second half gave the Trojans a quick lead, but Pittsburg would quickly regain it. After going back-and-forth for most of the third, Pittsburg went on an 11-3 run to end the quarter with an eight-point advantage.

The fourth quarter saw two quick baskets from Kross Hamblin to bring the Trojans to within four points. Including the third quarter, Hamblin had scored nine straight Girard points to keep them in it. Buckets from Eric Wilson and Drew Davied concluded Girard’s first fourth-quarter comeback, and a free throw from Hamblin gave the Trojans the lead. Pittsburg used a pair of threes and a pair of free throws to take a 61-58 lead with 1:35 remaining in the game. Davied would change that when he nailed a trey from the corner to tie the game with one minute left to play. Two free throws from Wilson would put Girard up by two points, and they would not surrender the lead again, sealing a 67-63 victory. 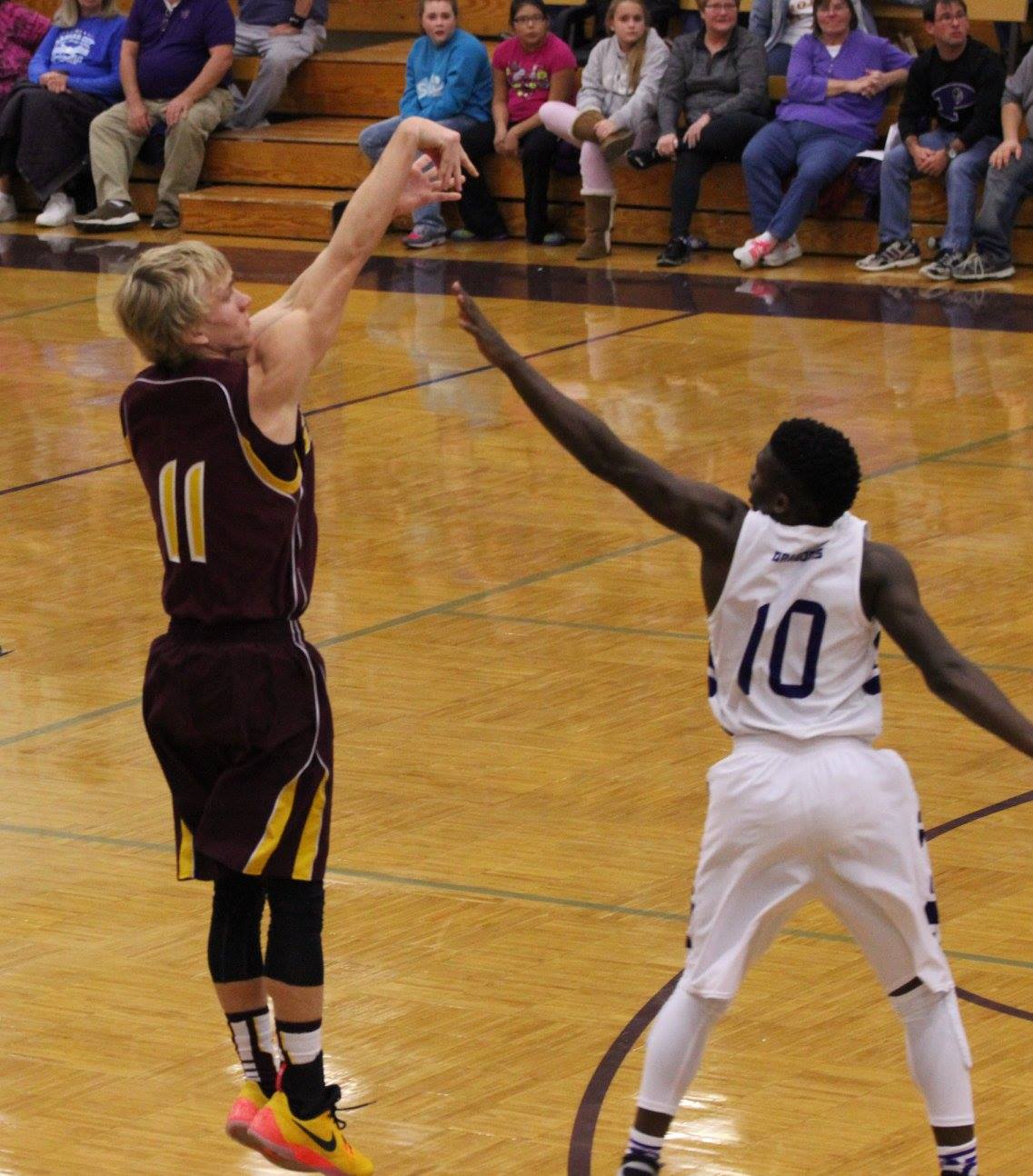 Laike Damman nails one of his four 3’s vs. Pittsburg on Tuesday. PHOTO BY JOYCE KOVACIC

Wilson scored all eight of his points in the fourth quarter to fuel the Trojans’ victory. Davied led the team with 18 points, while Hamblin added 17, and Damman scored 16. The Trojans (2-0) and Lady Trojans (1-1), will travel to Baxter Springs to resume play on Friday.